New data shows that the vast majority of recorded drug offences in England and Wales are for drug possession, with cannabis possession offences making up the bulk.

The government continues to criminalise thousands of people despite their own evidence showing that this policy is failing. In 2014, Home Secretary Theresa May commissioned a report in which researchers concluded that they did not “observe any obvious relationship between the toughness of a country’s enforcement against drug possession, and levels of drug use in that country”. May subsequently attempted to remove parts of the report that she did not agree with because she “didn’t like the conclusions”, according to Nick Clegg, who was deputy prime minister at the time.

More recently, in November 2017, May doubled down on her commitment to this failed policy; she proclaimed at a prime minister’s question time session that “it is right that we continue to fight the war against drugs”.

Amber Rudd, the current home secretary, has been slightly more measured in her remarks on drug policy. In a 2017 Huffington Post article, Rudd extolled the government’s approach, portraying it as compassionate towards people who use drugs, and harsh upon those who traffic them; “Unscrupulous drug dealers will continue to face the full force of the law. Being tough on drugs is vital, but it cannot be all we do. It is vital we protect the vulnerable – to prevent them falling into the cycle of drug abuse and to help them turn their lives around”.

Rudd’s remarks, as data shows, is far from the reality of drug policing. Only a small proportion of offences relate to “drug dealers” facing the “full force of the law”, while the vast majority of drug offences lead to people being marginalised or criminalised for possessing small quantities of drugs for their own use. This, in turn, dissuades people who want help for their drug use from seeking it – due to fear of arrest or humiliation.

At the launch of the government’s latest drugs strategy, Rudd said she wants “a society free from the harms caused by drugs”. Yet her government has cut the public health grant (which local authorities use to fund drug treatment), consistently blocked the introduction of life-saving drug consumption rooms, and has failed to efficiently support a take-home naloxone programme – which would allow people who use opioids to have easy access to a cheap overdose-reversing medication. These actions are driving the country’s rate of overdose deaths – which is currently at a record high. 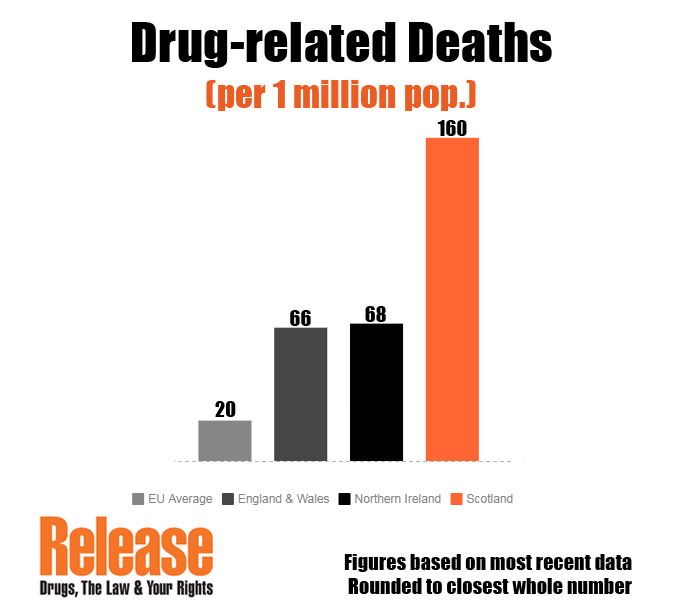 And of course, for people who use drugs non-problematically – including many of the people involved in the 102,264 cannabis possession offences last year – the government’s punitive approach can lead to criminal records which can be far more harmful than the drug they were using. A caution or conviction for cannabis possession can have far-reaching consequences – from hindering job applications to disqualifying people from obtaining certain international visas.

We also know that drug policing disproportionately targets ethnic minorities around the UK.

“In 2009/10, black people were 5 times more likely to be searched than their white counterparts but when looking specifically at drug searches that figure jumped to 6.3 times”, according to a document published by Release, the UK’s centre of expertise on drugs and drug law. “Disproportionality existed across other [black and other ethnic minority] groups with Asians being 2.5 times more likely to be searched for drugs and mixed twice as likely.” 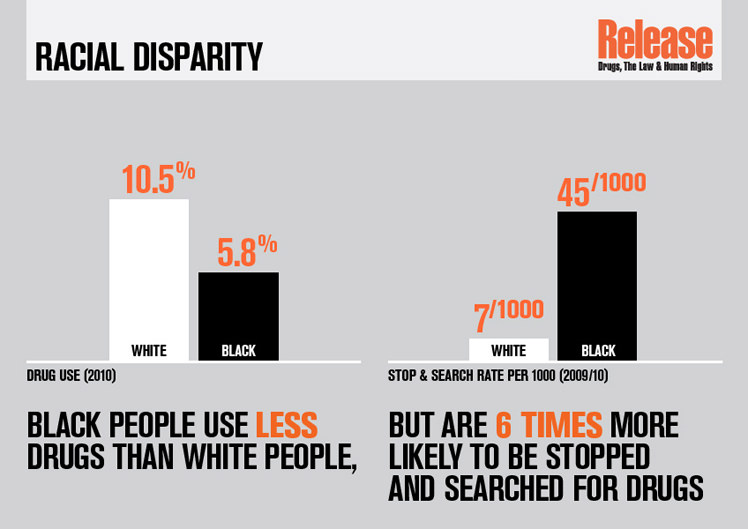 The majority of such searches, which significantly contribute to the criminalisation of ethnic minorities, “were for low-level street possession,” according to the police watchdog, Her Majesty’s Inspectorate of Constabulary. This is despite white people being considerably more likely to have used an illegal drug in the past year than people who are black, Asian, or of an “other” race, according to the government’s own statistics.

The government’s repressive approach to people who use drugs shows no sign of slowing down.